“..While the Giants went on to defeat the Philadelphia Athletics four games to one in the 1905 World Series, Graham left baseball to fulfill his dream of becoming a medical doctor, eventually pursuing his life’s work in Chisholm, Minnesota, the year following the Great Chisholm Fire of 1908. “Doc” Graham spent his first six years practicing medicine at Chisholm’s Rood Hospital and the next 44 years as physician for the Chisholm schools, where he gained national recognition for his thirteen year study of children’s blood pressure, as well as the love and respect of the entire local community.

Field of Dreams – What Do You Want – Terence Mann – YouTube

‘..n 1988, the Lansing Family Farm exchanged its humble roots for a destiny very few could have imagined. However, the story only begins there. Not long after the film’s release, believers shaped, molded, and lovingly preserved what Hollywood and a brilliant novel had set in motion that previous year…”

‘Field of Dreams’ at 30: 5 things you never knew about the baseball classic from an ‘Exorcist’ connection to a lost James Earl Jones speech Ethan Alter
Senior Writer, Yahoo Entertainment
Yahoo MoviesJune 14, 2019 yahoo.com
“..Three decades later, though, people have come back to Field of Dreams again… and again… and again. In fact, they’ll have another chance this weekend, when Fathom Events and TCM Big Screen Classics hosts a special 30th Anniversary screening on June 16 — Father’s Day — in theaters across the country. (An encore presentation is scheduled for June 18; visit Fandango or Atom Tickets for showtimes and ticket information.)

That date only makes sense as Field of Dreams isn’t just one of the most beloved sports movies of all time; it’s also become a rite of passage that dads share with their sons and daughters. Because as the emotional final scene drives home, the real subject of the film isn’t baseball — it’s what parents can teach children and children can teach parents. “I’m always grateful for it,” Robinson tells Yahoo Entertainment. “You always hope a movie is going to do well, but you can’t really count on that. It’s remarkable to me that we’re still talking about Field of Dreams.” Here are five remarkable things we learned about this one-of-a-kind movie…”

19 facts about ‘Field of Dreams’ that go the distance
Chris Chase @FireChrisChase
May 25, 2017 at 6:40p ET foxsports.com
“..Field of Dreams came out 28 years ago this month. To celebrate the timeless baseball classic, FOX Sports looks at 19 things you might not have known about one of the three greatest sports movies ever made. (Don’t @ me.)

Field of Dreams is based on the book Shoeless Joe by W.P. Kinsella. Producers wanted to use the same name for the film but the studio thought people would think it was about a homeless man or hobo. Field of Dreams was chosen instead, which was fine with the author – he’d always wanted his book to be called The Dream Field…
..”

25 Fast Facts About Field of Dreams BY ROGER CORMIER APRIL 23, 2015 mentalfloss.com
“..Either way you look at it, the Oscar-nominated movie—which made its debut on May 5, 1989—is still being talked about more than a quarter-century later.

1. IT WAS BASED ON A BOOK CALLED SHOELESS JOE.
Field of Dreams writer-director Phil Alden Robinson loved W.P. Kinsella’s Shoeless Joe since the book was first published in 1982. Robinson continued working on the adapted screenplay, despite 20th Century Fox’s repeated insistence through the years that it wasn’t commercial enough. Eventually Robinson and producers Lawrence and Charles Gordon sold the screenplay to Universal…”

Field of Dreams – Script to Screen

Celebrity Baseball Game at the 25th Anniversary of Field of Dreams

Kristy Swanson on Father’s Day and Field of Dreams

Ray Kinsella’s father returning to Field of Dreams, again, for 30th Anniversary Sat., June 15, 2019 thegazette.com
Actor returning to the heaven he found in E. Iowa
“..Brown played John Kinsella, a former minor league player and late father of Ray Kinsella, played by Kevin Costner. The two never reconciled after a rift when Ray was 17. They argued over the guilt or innocence of John’s idol, Shoeless Joe Jackson, one of eight White Sox players accused of throwing the 1919 World Series in a gambling deal, in what became known as the Black Sox Scandal.

Now an adult, Ray is the novice farmer who heard a voice saying the movie’s other famous tagline, “If you build it, he will come.” Believing the “he” to be Jackson, Ray builds the ball diamond, against all the warnings that he’d go bankrupt tearing up the cornfield.

Spoiler alert: At the movie’s end, Ray discovers the “he” actually refers to his father, who has emerged with the other ghost players for a game there. After an awkward meeting between father and son, as John turns to disappear back into what’s left of the cornfield, Ray mends their broken hearts with a simple invitation: “Hey, Dad? You wanna have a catch?”

Behind The Scenes Field Of Dreams 30th anniversary … – YouTube

Is This Heaven? Actor Dwier Brown to Celebrate 30th Anniversary of “Field of Dreams” at Bowman Field by: Robin Deehan

“.. The club is celebrating the 30th anniversary of the baseball classic. Brown told Eyewitness Sports he believes the film still resonates all these years later because it’s about second chances. ..” 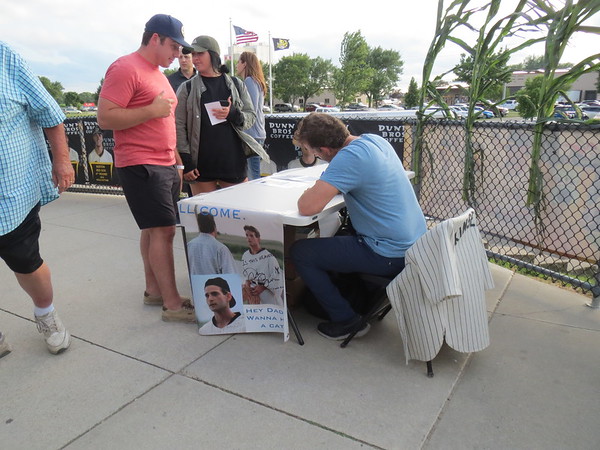 Interview with Dwier Brown from Field of Dreams

If You Build It…: A book about Fathers, Fate and Field of Dreams Paperback – April 14, 2014 amazon.com
“If You Build It… is a funny and moving memoir about Fathers, Fate and Field of Dreams. Dwier Brown played Kevin Costner’s father for five minutes at the end of the movie Field of Dreams. Despite being an actor for 35 years and performing in hundreds of other films, plays and television shows, it was those five minutes that changed his life. Since the movie’s release in 1989, Brown has been recognized by dozens of fans who have told him poignant stories about their fathers and how watching the film changed their lives. Their touching stories helped Brown put into perspective his own father’s unexpected death just a month before he began filming Field of Dreams…”

We asked “If you could say anything to your Dad right now, what would it be?”
https://www.youtube.com/watch?v=vJbpOX_imfk
*see Deep Thought: What’s an “ideal” father? goodnewseverybodycom.wordpress.com

“Is this heaven?”
*see Deep Thought: Is “Heaven” for real? goodnewseverybodycom.wordpress.com