Just finished watching the Disney’s “new version” of “Lion King” late last night. We were just a few in the movie theater as it was a late night showing (9pm) 3D special . I was hoping to watch it back in Morris, but the weather was too nice out and had plans every evening last week.

I knew the plot of the movie already, but I was anticipating on how they did this “remake” in more “real life” animation version. I was very pleased how they made, it, but somehow got a “revelation” watching it “again”.

Here are just some that I personally got. When Simba was coaked by his uncle into “leaving” after he “supposedly” caused his father’s death. As “kids”, we all get curious..

He went to this “unfamiliar” place where he met Timon & Pumbaa. They tried to “mess up” with Simba’s mind about his true identity as a “lion” , so he won’t become their enemy in the “animal kingdom” or “chain of predators”.

Predator Hierarchy | Southern African Safaris | Classic Africa .classicafrica.com
“..As a rule, lions rule supreme, both by virtue of their sheer physical strength, and because of the co-ordinated power of the lion pride. Through cooperative hunting efforts, lions are essentially the only predators capable of taking prey up to the size of Cape buffalo, hippos, giraffe, and even sub-adult elephants. It is a myth that only females can hunt – male lions are in fact very successful hunters, but they avoid it as far as possible as they must conserve energy to defend their territories. Typically, females do most hunting but are displaced from the kill by pride males; once the males are satiated, the females will feed, and cubs eat last.

Next in line are Spotted hyenas. Still largely misunderstood, hyenas are not just scavengers but very successful hunters in their own right. Although they are also highly social, hyenas differ from lions in several respects. Firstly, they are dogs, and the hyena clan is dominated by females, who are physically larger and more aggressive than the males. Usually, hyena clans are not capable of driving a pride of lions from a kill, provided a mature male lion is present; if, however, no pride male is present and hyenas outnumber lionesses and sub-adults by a ratio of four to one, hyenas will carry the day..”


lion king – remember who you are (HD)
https://www.youtube.com/watch?v=O7fXfCZ4sB4
“…you see He (your father) lives in you…”

“Who are you?” – asked by Rafiki to Simba was a great question about “who do you identify with?” . During this scene, I started reflecting on who I identify with. I used to struggle with this generally. I wasn’t sure who I am . My name is Sal, but I struggled with my “racial cultural identification”. I grew up in a majority “white Caucasian” school and was conflicted internally with my “racial identification” (see blog above or personal testimony).

God in Film The Lion King

Our True Identity graceofpreaching.blogspot.com
“… Simba, though, was a lion and a king. And it was living according to that identity that gave him true joy. We are, in Christ, little anointed ones, little christs. In Jesus, we are sons and daughters of God. That identity gives us true joy, and helps us know how we are to live our life. ..” 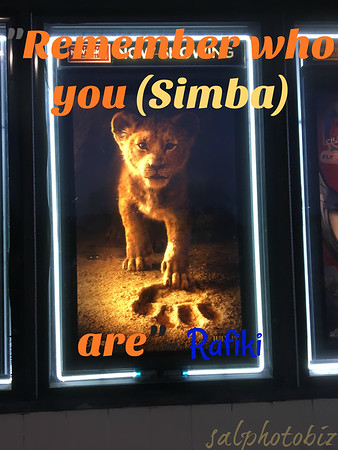 THE LION KING December 20, 2017 warsoftherosoes.blogspot.com
“..The Lion King Besides inspirations from William Shakespeare’s Hamlet, the story also has elements of the Osirian family myths of Ancient Egyptian mythology. In the Osirian myths, the king (Mufasa/Osiris) is killed by his jealous brother (Scar/Seth) and the rightful heir (Simba/Horus) is sent into exile as a boy. The murdered king visits and mentors his son in ghostly visits and when the heir comes of age, he returns to exact revenge on his father’s murderer.-http://m.imdb.com/title/tt0110357/trivia..”