5 Things You Need To Know About African History Before You Watch Black Panther!

All the futuristic technologies in ‘Black Panther,’ and how close they are to becoming reality Kaylee Fagan Feb. 26, 2018, 6:14 PM

businessinsider.com
“…The Afro-futurist blockbuster takes place in Wakanda, a fictional African nation that is generations ahead of the rest of the world technologically, but chooses to hide its innovations in order to protect its people.

There are several references to futuristic vehicles in the film, but none got more screen time than the high-speed magnetic levitation subway that runs through Wakanda’s famous vibranium mine.

Shuri’s maglev may be years ahead of any current transit rail systems, but as with most conceivably achievable sci-fi tropes, Elon Musk is working on it.

Just last week, SpaceX got a permit to begin excavations in Washington, DC for building the Hyperloop, a high-speed, vacuum-powered railway that Musk says will someday be able to carry passengers from New York to the capitol in under 30 minutes.

The technology is still in its infan..

So the lore goes, a large meteorite full of vibranium crash-landed in Wakanda, and the material is highly coveted throughout the rest of the world.

The fictional element is used to make weapons, including Captain America’s shield, as well as vehicles and other tech throughout Wakanda. It’s also stitched into Black Panther’s suit, making it bulletproof and giving T’Challa the ability to absorb the energy from blows he sustains and release that energy when it’s useful, but we’ll talk about that later in the list.,,,

…Although vibranium has a few properties that are nearly impossible to emulate in real life, most experts agree that graphene is a comparable real-life counterpart. (Yes, there are superhero physics experts.)

Graphene may not look like much, but it holds the title of the strongest material ever tested. In an op-ed for Wired, Physicist and University of Minnesota professor James Kakalios described graphene as “10 times more bulletproof than steel” and practically invisible, due to its unique atomic structure.
..” 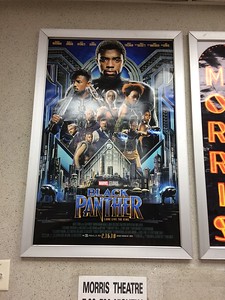 This is an on-going blog, so feel free to come back for updates. Till then, feel free to post any suggestions, comments, feedback, etc..