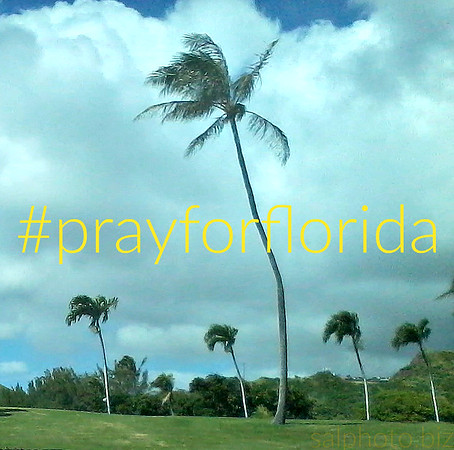 This Guy’s Brilliant Reason for Hanging Trash Bags on His Door Has 160,000-Plus Americans Sharing With Friends in Florida conservativefighters.com

“…If you can’t get a hold of sandbags, Sweat explained he’s learned a trash bag one-third filled with water can make a “good substitute.” As for the garage, he noted that sealing it off with duct tape can be a good way to prevent “water intrusion.” He also added that paint cans and five-gallon buckets can serve as a good way to easily elevate furniture.

Even if you’re evacuating, he suggested that everyone trip the main breaker so the electricity in the house isn’t running. An electric current and water is a lethal combination; Sweat revealed that a volunteer, who went to check on a house, was electrocuted and killed because the power was on.

For those who didn’t evacuate, Sweat urged people to wear clothes to bed because “nothing looks worse than seeing people on the news in water-logged nightgowns and boxer shorts.”

His other tips included wearing hard-soled shoes and carrying identification, a flashlight, and a large white sheet to signal for help if necessary…”

The loss of the ocean is actually due to the proximity of Irma to the Bahamas and the storm’s low-pressure center. When a storm has such an intense low pressure, it can impact the surface of the water because there is less atmospheric pressure being applied. If you were to take a look at a cross section of the storm through the water you would see a bulging effect. This bulging is the storm surge that Irma borrowed from the area around the Bahamas. It is quite noticeable in Long Island because this is a shallow area with unvarying depth. This causes the impact to be so remarkable.
When will the water come back?

Hurricane Irma exposes racial tensions on smashed St. Martin By thomas adamson and danica m. coto, associated press MARIGOT, St. Martin — Sep 11, 2017, 3:23 PM ET abcnews.go.com
“… It’s common practice for tourists to be evacuated first from disaster zones for practical reasons, as they are staying in hotels and not in their homes and tend to have fewer resources such as food and vehicles. The French prime minister insisted Monday that the only people being prioritized were the most vulnerable.

Government spokesman Christophe Castaner said he understood islanders’ frustration with the government response but blamed part of the controversy on their “emotional shock, an impact that’s extremely hard psychologically.”

Soudiagom and other witnesses told Guadeloupe 1ere that the boat they took Friday carried tourists, including Americans, to safety but left many St. Martin residents behind, including needy mothers and children…”

Irma begins to batter Florida with hurricane-force winds; tornadoes reported By EMILY SHAPIRO Michael Edison Hayden Morgan Winsor JULIA JACOBO David Caplan Sep 10, 2017, 12:18 AM ET abcnews.go.com
“..The worst and most extreme winds from Irma will begin to impact the Florida Keys shortly after midnight, with the center of Irma expected to pass over the Keys between 6 a.m. and 9 a.m. ET, Peck said. ..

The storm, which was downgraded to Category 3 after making landfall as a rare Category 5 hurricane in Cuba overnight, has sent 75,000 people into shelters in Florida. More than six million people have been warned to evacuate its path. ..

Storms surges from #HurricaneIrma will be “dangerous” and “life-threatening” for people who didn’t evacuate. https://t.co/aucHio6q5u pic.twitter.com/lSKtSAsboj

“..While many Floridians have raced out of state to avoid Hurricane Irma, a brave few have put themselves in harm’s way to help others get to a safe place One of those such heroes is Tampa Bay Buccaneers wide receiver Bernard Reedy, who remained in the path of the storm to help wheelchair-bound residents escape the storm Heading into training camp, Reedy was somewhat of a long-shot to make the Bucs’ 53-man roster, but his special teams prowess and impressive speed helped him lock in a spot for Week 1 ..”
NFL player helps wheelchair-bound residents avoid Hurricane Irma Updated: 1:28 PM EDT Sep 10, 2017 National Desk Staff wtae.com
“..Wide receiver Bernard Reedy has worked for Care Ride, a company that helps transport wheelchair-bound residents, making $11 per hour, according to a Sunday story from the NFL team.
Advertisement

But he decided to give the transportation service a call and has worked to help people in the Tampa Bay area evacuate during the past few days as the storm arrives, the story says.

Reedy started the transportation-service position after he was cut by the Falcons in 2015 and saw a Care Ride van client being dropped off at a Burger King, the Tampa Bay Times reported.

He said he’d rather not sit at home after he’s done working out.

According to the newspaper, Care Ride administrator Doug Johnson jokingly offered earlier this month to raise Reedy’s salary to $13 per hour with the hopes of keeping Reedy…”

Destructive winds, rain hit Florida as Hurricane Irma’s makes landfall in the Keys
By Perry Stein, Joel Achenbach, Wesley Lowery and Mark Berman September 10 at 9:41 AM .washingtonpost.com
“..MIAMI — The fierce winds of Hurricane Irma regained Category 4 strength with winds of 130 mph early Sunday, as the storm’s eye made it to the lower Florida Keys just before 9 a.m. The massive storm already has caused hundreds of thousands of power outages across South Florida, its leading edge lashing several major population centers.

The National Weather Service said the storm made landfall at Cudjoe Key in the lower Florida Keys at 9:10 a.m. on Sunday morning. Forecasters warn that a second landfall could happen later on Sunday.

Officials said storm surges in the Keys reach a devastating five to 10 feet there before the hurricane slowly proceeds up the state’s west coast….

While the National Hurricane Center had downgraded Irma to a Category 3 storm Saturday, the storm was upgraded again to Category 4 early Sunday. At 5 a.m., weather officials said the storm was plodding northwest at about 8 miles per hour, placing it on pace to reach Naples by about 5 p.m. The storm could potentially make a second landfall further north on Sunday….”
Category 4 Hurricane Irma Makes Landfall in the Florida Keys; Strongest Keys Strike in 57 Years
Sep 10 2017 09:30 AM EDT
weather.com

A post shared by VEM Productions Media (@vemproductionsmedia) on Sep 9, 2017 at 9:51pm PDT

//platform.instagram.com/en_US/embeds.js
*note : false tornado from Irma, but from Texas in another storm!

“…Limbaugh has long been hell-bent on saying hurricanes and storms like it are part of a liberal conspiracy solely aimed at furthering the discussion on climate change, but his claims about Irma in his Tuesday broadcast sent many over the edge. ..”

Hurricane Irma Live: ‘Biggest Thing’ to Do Is Pray, Florida Governor Says By THE NEW YORK TIMESUPDATED 2:39 PM Continue reading the main story .nytimes.com
“..The biggest thing you can do now is pray,” Gov. Rick Scott said on Sunday afternoon.

Irma was downgraded on Sunday afternoon to a Category 3 hurricane, with maximum sustained winds near 120 miles per hour, down from 130 m.p.h., according to the National Hurricane Center. The center said that while the storm was weakening, it was “expected to remain a powerful hurricane.”

A $150 Billion Misfire: How Disaster Models Got Irma WrongBy Brian K Sullivan ‎September‎ ‎11‎, ‎2017‎ ‎6‎:‎50‎ ‎PM Updated on ‎September‎ ‎12‎, ‎2017‎ ‎12‎:‎10‎ ‎PM bloomberg.com
“..By one estimate, the total cost dropped to about $50 billion Monday from $200 billion over the weekend. The state escaped the worst because Irma’s eye shifted away from the biggest population center of Miami-Dade County.

The credit goes to the Bermuda High, which acts like a sort of traffic cop for the tropical North Atlantic Ocean. The circular system hovering over Bermuda jostled Irma onto northern Cuba Saturday, where being over land sapped it of some power, and then around the tip of the Florida peninsula, cutting down on storm surge damage on both coasts of the state.
….

…In the end, Irma landed on the Florida Keys as a Category 4 hurricane with 130-mile (209 kilometers) per hour winds, then as a Category 3 at Marco Island. It reached the Tampa Bay area as a Category 2. By contrast, Hurricane Andrew in 1992 plowed into the east side of Florida as a Category 5…”