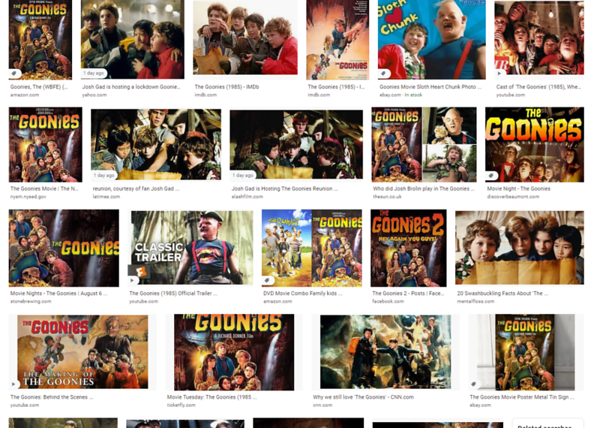 The Goonies: Behind the Scenes Featurette

On Location: The Goonies (1985) Filming Locations!

19,311 views•Mar 7, 2019
Beyond the Backlot
4.23K subscribers
Beyond the Backlot taps into our hunger for nostalgia by visiting the current day filming locations of The Goonies up in Astoria, Oregon. Superfan Curtis Templeton and crew take us on a treasure-hunt style adventure tracking down these locations and sits down with Richard Donner to hear from The Goonies director himself.

AS FEATURED IN GOOGLE’S AD “FIND YOUR SCENE”

What if your favorite movie could come back to life? It does in Beyond the Backlot.

As kids of the 70s, 80s, and 90s, we have fond memories of watching our favorite films over and over. Thanks to theaters and VHS tapes, these movies aren’t just blockbusters from the past – they’re part of our childhood.

Beyond the Backlot taps into our hunger for nostalgia by visiting the current day locations of our favorite films.

Ke Huy Quan
Biography imdb.com
“..When phoning his mother during the Indiana Jones and the Temple of Doom (1984) movie shoot, he referred to George Lucas and Steven Spielberg as bearded man 1 and bearded man 2.
His brother was the one actually auditioning for the role of Short Round in Indiana Jones and the Temple of Doom (1984). Jonathan just followed his brother along, but the casting people decided to pick him instead.
Attended Alhambra High School in Alhambra, California, USA.
In the scene in The Goonies (1985), where rocks are falling from the cave ceiling, he screams “Holy S-H-I-T”, spelling the expletive rather than saying it. He did this because his mother made him promise not to use any bad language in the movie…”

The Making of a Cult Classic: The Unauthorized Story of ‘The Goonies’ (2010) – DVD Bonus Material

To watch the full Sean Astin panel, check out this link – https://youtu.be/bP4Fafk2wCo

“The Goonies” is a 1985 American adventure comedy film that became a cult classic. It is centered on a band of kids who live in the “Goon Docks” neighborhood of Astoria, Oregon who attempt to save their homes from demolition, and in so doing, discover an old Spanish map that leads them on an adventure to unearth the long-lost fortune of One-Eyed Willy — a legendary 17th-century pirate. They are continuously chased by a family of criminals who want the treasure for themselves. In 2017, the film was selected for preservation in the United States National Film Registry by the Library of Congress as being “culturally, historically or aesthetically significant.”

Sean Patrick Astin (born February 25th, 1971) is an American film actor, voice actor, director and producer well known, as well, for portraying ‘Samwise Gamgee’ in “The Lord of the Rings trilogy” (2001–2003), the title character in the inspirational and universally applauded “Rudy” (1993) and most recently ‘Bob Newby’ in the second season of Stranger Things (2017). His other notable television roles include ‘Lynn McGill’ in the fifth season of “24,” voicing ‘Raphael’ in Nickelodeon’s “Teenage Mutant Ninja Turtles” (2012-2017) and ‘Jim Kent’ in Guillermo del Toro’s “The Strain” (2014-2015). His appeared in films throughout the 1990s including the Showtime science fiction film “Harrison Bergeron” (1995), the Gulf War film “Courage Under Fire” (1996), the Warren Beatty political satire “Bulworth” (1996) and the romantic comedy “Boy Meets Girl” (1997). Astin also appeared in the successful Adam Sandler comedies “50 First Dates” (2004) and “Click” (2006).

Jonathan Luke Ke Huy Quan (born August 20th, 1971) is a Vietnamese-born American actor and stunt choreographer of Chinese descent who became a child actor at age 12 opposite Harrison Ford in “Indiana Jones and the Temple of Doom” (1985). He played a pickpocket orphan in the 1986 Taiwanese movie “It Takes a Thief.” In 1987, he appeared in the Japanese movie “Passengers” with the Japanese idol singer Honda Minako. He played Sam on the short-lived TV series “Together We Stand” (1986–1987) and played Jasper Kwong in the sitcom “Head of the Class” from 1989 to 1991. He also starred in the movie “Breathing Fire” (1991) and had a small role in “Encino Man” (1992). He played the starring role in the 1993 Mandarin language TV show “The Big Eunuch and the Little Carpenter” which ran for forty episodes. He also starred in the 1996 Hong Kong/Vietnam collaboration movie “Red Pirate.” He last appeared onscreen in the 2002 Hong Kong movie “Second Time Around” alongside Ekin Cheng and Cecilia Cheung.

Watch The Goonies Cast Reunite For A Hilarious And Nostalgic Zoom Session
Sean O’Connell
SEAN O’CONNELL
APR. 27. 2020 10:10 AM cinemablend.com
“..While the world is stuck at home, most of us are binging comfort movies to pass the time. And an absolute favorite in the CinemaBlend offices has to be Richard Donner’s The Goonies, a treasure-hunting jewel of a film that’s incredibly special to an entire generation of film geeks. The movie actually turns 35 years old this year (wtf?), and to celebrate the movie – and revel in the nostalgia – the cast got together (with an assistance from Josh Gad) for a wonderful interview session. Watch it for yourself below:..”

Where are they now?

Whatever Happened to ‘Goonies’ and ‘Indiana Jones’ Star Jonathan Ke Quan?
Jeremy Taylor
January 12, 2012 thefw.com
“..Now: These days, Ke Quan is a stunt coordinator, with credits on ‘X-Men’ and ‘The One.’ Save for one appearance in a movie from Hong Kong, Ke Quan’s last role was a cameo in 1992’s ‘Encino Man.’ The 40-year-old recently told ‘Access Hollywood’ that he is developing an action project which he hopes to direct…”

The Tragic Real-Life Story Of The Man Who Played Sloth

*see Deep Thought: What can be done to “stop” lives being taken away due to Drug -Alcohol Overdose? goodnewseverybodycom.wordpress.com

The Goonies as a Thriller – Trailer Mix

The Goonies From Wikipedia, the free encyclopedia
“..The screenplay was written by Chris Columbus from a story by executive producer Steven Spielberg. A band of kids who live in the “Goon Docks” neighborhood of Astoria, Oregon, attempt to save their homes from demolition, and, in doing so, discover an old Spanish map that leads them on an adventure to unearth the long-lost fortune of One-Eyed Willy, a legendary 17th-century pirate. During the entire adventure, they are chased by a family of criminals, who want the treasure for themselves.

10 Things You Might Not Know About The Goonies Emily Asher-Perrin
Mon Aug 20, 2012 11:00am tor.com
“..Jonathan Ke Quan (billed then as Ke Huy-Quan in the film—he played Data as well as Short Round in Indiana Jones and the Temple of Doom) made a promise to his mother than he wouldn’t swear on camera. Of course, there was a line in the script that called for Data to say “Holy shit!” and Quan desperately wanted to deliver it. He split the difference, which is why Data shouts “Holy S-H-I-T” instead. Adorable.

‘The Goonies’ Turns 30: Where Are They Now?
By MICHAEL ROTHMAN Jun 7, 2015, 2:23 AM ET abcnews.go.com
“..Believe it or not, “The Goonies” turns 30 today and the Richard Donner-directed classic, written by Steve Spielberg, is chock full of great young actors that you may have forgotten about.