Beauty and the Beast – US Official Final Trailer

The final trailer for Beauty and the Beast is here 🌹 On March 17, rediscover a tale as old as time. Get your tickets now at BeOurGuest.com

—
Disney’s “Beauty and the Beast” is a live-action re-telling of the studio’s animated classic which refashions the classic characters from the tale as old as time for a contemporary audience, staying true to the original music while updating the score with several new songs. “Beauty and the Beast” is the fantastic journey of Belle, a bright, beautiful and independent young woman who is taken prisoner by a beast in his castle. Despite her fears, she befriends the castle’s enchanted staff and learns to look beyond the Beast’s hideous exterior and realize the kind heart and soul of the true Prince within. The film stars: Emma Watson as Belle; Dan Stevens as the Beast; Luke Evans as Gaston, the handsome, but shallow villager who woos Belle; Oscar® winner Kevin Kline as Maurice, Belle’s eccentric, but lovable father; Josh Gad as Lefou, Gaston’s long-suffering aide-de-camp; Golden Globe® nominee Ewan McGregor as Lumiere, the candelabra; Oscar nominee Stanley Tucci as Maestro Cadenza, the harpsichord; Oscar nominee Ian McKellen as Cogsworth, the mantel clock; and two-time Academy Award® winner Emma Thompson as the teapot, Mrs. Potts.”

Critics Consensus: With an enchanting cast, beautifully crafted songs, and a painterly eye for detail, Beauty and the Beast offers a faithful yet fresh retelling that honors its beloved source material.
“
Why Some Parents Say Christians Should Watch Disney’s Beauty and the Beast 03-19-2017 www1.cbn.com
“..When Disney announced it would feature an “exclusively gay moment” in its new “Beauty and the Beast” remake, Christians everywhere vowed to boycott the movie. Despite the backlash, some Christians say parents should think twice about prohibiting their children from seeing the film.

CBN News caught up with folks who saw the movie opening weekend to find out what they think about the controversy. Click the video above to see what they said.

One of those parents is Sarah Wallace, a blogger for The Gospel Centered Mom, and mother of four. She says the movie gives parents the opportunity to teach their children how to interract with a world that loves sin.

“This is the culture God has appointed for us to raise our children in. We need to know how to live in it and interact with it,” she says. Instead of ignoring a culture that celebrates homosexualtiy, Wallace argues that Christians should send their children out into the world with strong knowledge of what the Bible says. ..”
*see Homosexual Acts a Sin? Judge Not! goodnewseverybodycom.wordpress.com

Sal: I’ve seen various versions of this story, but somehow this particular movie inspired me to write about this one. One major reason was the character…

Hattie Morahan as Agathe /en.wikipedia.org
“..– a reclusive, old woman who lives in Villeneuve who, in reality, is a beautiful enchantress in disguise responsible for cursing the Prince. She watches and manipulates the events between Belle and the Prince, secretly acting as their guardian.[18]

I saw her as the “guardian” angel and a particular symbol in the Bible of someone we “humans” need to watch for in life. Can’t let looks disguise you as the theme of this movie pretty much teaches..

What’s Up With Agathe In ‘Beauty And The Beast’? She’s A Complicated Character, To Say The Least By Olivia Truffaut-Wong bustle.com
“..Just a nameless and vindictive creature in the animated film, the Enchantress depicted in the new Beauty and the Beast, as played by Hattie Morahan, has a life beyond just cursing a spoiled Prince who refused to give her shelter. Named Agathe, the Enchantress appears in the prologue scene to curse the Beast, but she also pops up throughout the film as a villager. Agathe makes her debut in the film as the provincial town’s local old maid. She is an unmarried woman left begging on the streets, used by Gaston as a cautionary tale after Belle tells him she doesn’t want to go out with him. Pointing to Agathe, Gaston warns Belle that, in this town, an unmarried woman is destined to end up on the street…

Perphas the most significant change to the story in the live action Beauty and the Beast is the presence of Agathe at the end of the film. In the movie, the last rose petal has already fallen when Belle tells the Beast that she loves him. Belle didn’t break the curse at all, Agathe did. When the townspeople rush the castle, she enters with them, slipping in among the angry mob and making her way up to the West Wing of the castle. After witnessing Belle’s declaration, Agathe makes the conscious decision to lift the curse. In other words, she plays an active role in creating their Happily Ever After. Ultimately, the power to break the curse is in her hands and hers alone. She’s not just a random witch, she’s a woman with agency….”
*see Deep Thought: What “causes” us to do “bad” (sin) stuff? goodnewseverybodycom.wordpress.com
on breaking that “generational curse”

What other “life lessons” or any personal thoughts or reflections you got from this movie or any of the Beauty and the Beast versions?

Beauty and the Beast (2017 soundtrack) From Wikipedia, the free encyclopedia wikipedia.org
“…Condon originally planned on not only drawing inspiration from the original film, but he also planned to include most, if not all, of the songs composed by Alan Menken, Howard Ashman and Tim Rice from the Broadway musical, with the intention of making the film as a “straight-forward, live-action, large-budget movie musical”. Menken returned to score the film’s music, which features songs from the original film by him and Ashman, plus new material written by Menken and Rice. Menken said the film would not include songs that were written for the Broadway musical and instead, created four new songs. On January 19, 2017, it was confirmed by both Disney and Celine Dion, singer of the original title track, that she will perform one of the new original songs, “How Does a Moment Last Forever”, to play over the end titles.[1][4] The film will also feature a new version of “Beauty and the Beast” by Ariana Grande and John Legend.[1][5] Some songs contained Ashman’s unused lyrics that were cut from the animated version…”
Beauty and the Beast (From “Beauty and the Beast”/Official Video) 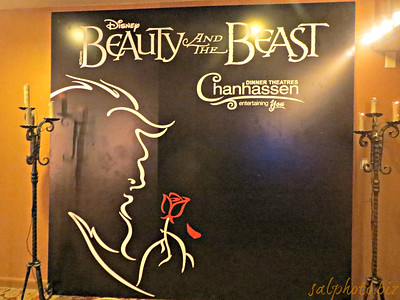 Thoughts of the new version? Any similarities and differences that stood out for you between the old and new? Anything interesting you would like me to add on this subject?