Judges 13 Tree of Life Version (TLV)
Birth of Samson biblegateway.com
“..13 Bnei-Yisrael again did what was evil in Adonai’s eyes, and Adonai gave them into the hand of the Philistines for 40 years. 2 Now there was a certain man from Zorah, from a Danite clan, whose name was Manoah. His wife was barren and bore no children. 3 Then the angel of Adonai appeared to the woman and said to her, “Behold now, you are barren and have not borne children, but you will conceive and bear a son. [a] 4 Now therefore be careful not to drink wine or strong drink, or eat any unclean thing. 5 For behold, you will conceive and bear a son. Let no razor come upon his head, for the boy will be a Nazirite to God from the womb.[b] He will begin to deliver Israel from the hand of the Philistines.”..”

Pure Talk Presents: Behind the Scenes of “Samson” with … – YouTube

Samson By Jacob Isaacs Published and copyrighted by Kehot Publication Society chabad.org
“..Their deliverer came at last from the tribe of Dan. In the small town of Zorah there lived a man by the name of Monoah; his wife was childless. One day an angel appeared to her, declaring that she would become the mother of a son who should, in due time, save the Hebrews from the hand of the Philistines. The boy was from his birth to be dedicated to G‑d as a Nazirite; no razor was ever to touch his hair. Amazed by what she heard, she told it to her husband, who devoutly prayed for another appearance of the Divine messenger. The vision was repeated, and the angel announced again, this time both to Monoah and his wife, the birth of the wondrous child, and renewed his former injunctions.

In due course the child was born, and was named Samson. At an early age, Samson realized that he possessed remarkable strength with which he was able to accomplish superhuman feats. Once he was confronted by a young lion, and without exerting much effort, tore it apart. Realizing that he had been endowed with this strength in order to help his people, Samson sought the occasion to vent his anger on the enemy. ..”

Taylor James (I)
Actor | Producer imdb.com
“..
Taylor was born in Sevenoaks England on 26th January 1980. Between the years of 1980-1986, he lived with his family in South Africa, before returning back to the Uk for schooling. Taylor attended secondary School in Northamptonshire from 1991-1997 before completing 2 years at Northampton college studying performing arts. In 2000 Taylor was awarded… See full bio »
..”

Caitlin Leahy (I) imdb.com
“..
Chicago native Caitlin Leahy is the middle of five children to Matt and Ellen Leahy. She received a BA in Theatre from Columbia College in her hometown. Caitlin moved to Los Angeles, California shortly after to pursue a career in film and television. She works actively as a model having appeared in ads for HBO’s Eastbound and Down season 4, … See full bio »
..”

Delilah Betrays Samson Judges 16 Tree of Life Version (TLV) biblegateway.com
‘….28 Then Samson called out to Adonai and said, “My Lord Adonai, please remember me and please strengthen me only this once, O God, so that I may this once take revenge on the Philistines for my two eyes.” 29 Then Samson grasped the two middle pillars on which the temple rested and leaned on them, one with his right hand and the other with his left. 30 Then Samson said, “Let me die with the Philistines!” He bent with all his might so that the temple fell on the lords and on all the people who were in it. So the dead whom he killed at his death were more than those whom he killed during his life.

31 Then his kinsmen and all his father’s household came down, lifted him, brought him up and buried him between Zorah and Eshtaol in the tomb of his father Manoah. For he had judged Israel 20 years…”

THE BOOK OF JUDGES biblescripture.net

Judges 13 New International Version (NIV)
The Birth of Samson biblegateway.com
“13 Again the Israelites did evil in the eyes of the Lord, so the Lord delivered them into the hands of the Philistines for forty years.

2 A certain man of Zorah, named Manoah, from the clan of the Danites, had a wife who was childless, unable to give birth. 3 The angel of the Lord appeared to her and said, “You are barren and childless, but you are going to become pregnant and give birth to a son. 4 Now see to it that you drink no wine or other fermented drink and that you do not eat anything unclean. 5 You will become pregnant and have a son whose head is never to be touched by a razor because the boy is to be a Nazirite, dedicated to God from the womb. He will take the lead in delivering Israel from the hands of the Philistines.”..”

Who Were the Philistines?
By Owen Jarus, Live Science Contributor | July 16, 2016 10:43am ET livescience.com
“.. Stories in the Hebrew Bible say that the Philistines clashed with the ancient Israelites many times. One of the battles supposedly took place between a Philistine force led by the giant man named Goliath and an Israelite force that included a man named David who would go on to become king of Israel. In the story David kills Goliath with a slingshot and the Israelites go on to rout the Philistine force. Whether David or Goliath ever existed — or if a series of wars between the Philistines and Israelites occurred — are matters debated by scholars. ..”

“The Christadelphian Watchman
Published on Apr 12, 2016
An account of the interaction of the Philistines with Israel. Key events are outlined

SAMSON KILL A LION WITH HIS BARE HANDS – YouTube 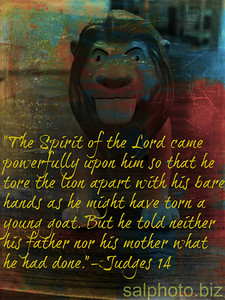 Samson Kills a Lion with His Bare Hands – YouTube

How Did Samson Topple the Temple of Dagon?
https://www.youtube.com/watch?v=2h0EAtzcZ50
*see Deep Thought: What are considered “idols”? goodnewseverybodycom.wordpress.com

Who was Dagon in the Bible? gotquestions.org
” Answer: Dagon was the chief deity of the Philistines, and the worship of this pagan god dates back the third millennium BC. According to ancient mythology, Dagon was the father of Baal. He was the fish god (dag in Hebrew means “fish”), and he was represented as a half-man, half-fish creature. This image furthered an evolutionary belief that both men and fish had evolved together from the primal waters. Dagon may also have been the provider of grain. So Dagon was similar to many other idols in that he personified natural forces that had supposedly produced all things…” 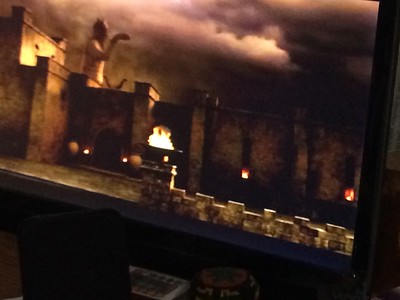 5. The Hands of Dagon and the Hand of God (1 Samuel 5:1-7:17) bible.org
“..It may appear to the Israelites and to the Philistines that God is now being held hostage by Israel’s enemies. Israel has been defeated in an initial battle with the Philistines, suffering the loss of about 4,000 lives (1 Samuel 4:1-2). The Israelites are wondering how their God could allow them to suffer this defeat, concluding that it is because they did not take the Ark of God into battle with them. Like a large good luck charm, they believe the presence of the Ark will make the difference. Confidently, the Israelites commence fighting. Fearfully, the Philistines rise to the challenge, dreading that it might mean death or defeat for them. Instead, it leads to an even greater defeat for the Israelites. Our text tells us that 30,000 foot soldiers are killed, along with the two priests, Hophni and Phinehas. When Eli learns that his sons are dead and that the Ark has been captured, he falls from his seat, breaking his neck and dying when he falls. He is followed in death by his daughter-in-law as she gives birth to the son she names Ichabod (gone is the glory), in light of the Ark being taken. ..”

“..Palmer
Published on Dec 3, 2017
The city where the nephilims fell and Dagon overthrown.
There was none of the Anakims left in the land of the children of Israel: only in Gaza, in Gath, and in Ashdod, there remained… (Joshua 11).
When the Philistines took the ark of God, they brought it into the house of Dagon, and set it by Dagon.
And when they of Ashdod arose early on the morrow, behold, Dagon was fallen upon his face to the earth before the ark of the LORD…(1 Samuel 5)..”

Secret History of the Philistines: The Disappearance of a People

The Death of Samson Judges 16 New International Version (NIV) biblegateway.com
“..25 While they were in high spirits, they shouted, “Bring out Samson to entertain us.” So they called Samson out of the prison, and he performed for them.

When they stood him among the pillars, 26 Samson said to the servant who held his hand, “Put me where I can feel the pillars that support the temple, so that I may lean against them.” 27 Now the temple was crowded with men and women; all the rulers of the Philistines were there, and on the roof were about three thousand men and women watching Samson perform. 28 Then Samson prayed to the Lord, “Sovereign Lord, remember me. Please, God, strengthen me just once more, and let me with one blow get revenge on the Philistines for my two eyes.” 29 Then Samson reached toward the two central pillars on which the temple stood. Bracing himself against them, his right hand on the one and his left hand on the other, 30 Samson said, “Let me die with the Philistines!” Then he pushed with all his might, and down came the temple on the rulers and all the people in it. Thus he killed many more when he died than while he lived…” 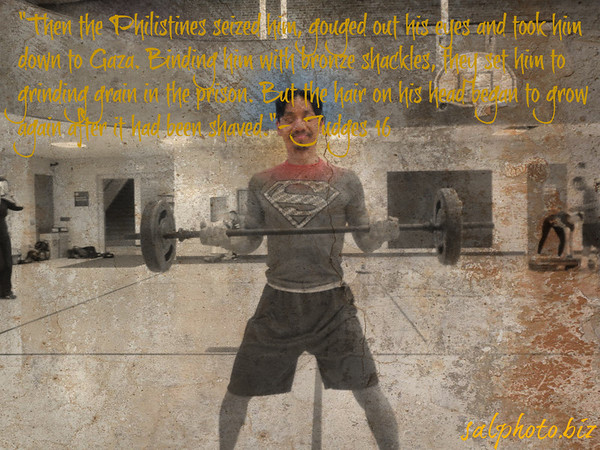