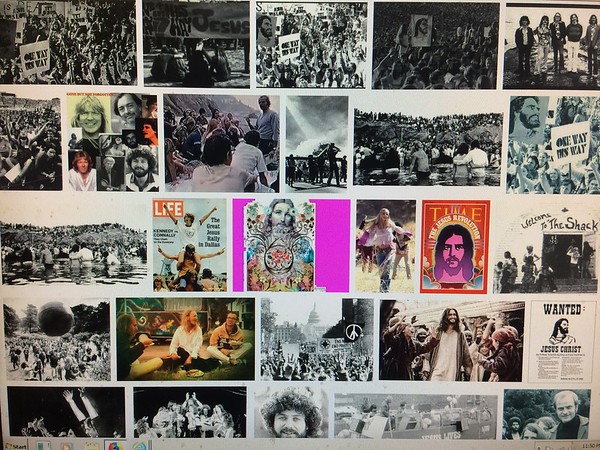 “..The Jesus movement was a movement in Christianity beginning on the West Coast of the United States in the late 1960s and early 1970s and spreading primarily through North America and Europe, before dying out by the early 1980s. It was the major Christian element within the hippie counterculture, or, conversely, the major hippie element within some strands of Protestantism. Members of the movement were called Jesus people, or Jesus freaks.” (..”

“..The reasons behind the rise of the hippie movement were complex: A rejection of conformity and materialism in American culture and the emergence of a drug culture both played a part.

..As many became disillusioned with life in Haight-Ashbury, a new set of hippie “Jesus freak” evangelists appeared in the Bay Area, urging people to follow Jesus Christ and forsake drugs and promiscuous sex. Key to this new presence on the streets was Ted Wise, a drug-using sailmaker, who in late 1965 was “saved” after one of his numerous LSD trips. ..

Eventually, the presence of the Jesus People attracted national publicity. Coffeehouses with names like “The Belly of the Whale” and “The Upper Room” appeared from coast to coast. Underground “Jesus papers,” like Los Angeles’ “Hollywood Free Paper” and Chicago’s “Cornerstone,” helped carry the message onto the streets. ..

One day-long festival in Dallas in June 1972, sponsored by the evangelical organization Campus Crusade for Christ (“Cru” today), attracted as many as 150,000 people. ..

By the late 1970s, however, the Jesus People had run out of steam. The hippie style grew less popular among teens. New styles of music and fashion came into vogue, and the Jesus People themselves grew older and moved on with their lives. But their impact lived on in a number of ways..

The rock-fueled enthusiasm of the Jesus People for upbeat music created a “Contemporary Christian Music” industry and triggered controversial change in many churches’ worship styles and music. As the years passed, hymns, choirs and organs were increasingly replaced in many churches with “praise choruses,” “worship bands” and electric guitars.

The two largest Christian groups to emerge in late 20th-century America, the Calvary Chapel “fellowship of churches” and the Vineyard denomination, trace their roots to the Jesus People movement. Characterized by upbeat music, Pentecostal demonstrations of spiritual gifts and an informal “come-as-you-are” vibe, these two groups are today the largest institutional evidence to come out of the movement. ..”

They Got High on Jesus Instead
Larry Eskridge remembers the hippies, druggies, and assorted countercultural freaks who embraced Christianity in the late 1960s.
John G. Turner| July 11, 2013 christianitytoday.com
“.. In God’s Forever Family: The Jesus People Movement in America (Oxford University Press), Larry Eskridge provides a rich, tender history of one of the more surprising developments of the late 1960s. Coffee houses, communes, buttons, record albums, and underground newspapers witnessed to American youth that there was still only “One Way” to heaven, but not exactly the way their parents had taken. These young people listened to Larry Norman and Love Song (one of the earliest Christian rock bands), bought Hal Lindsey’s The Late Great Planet Earth, spoke in tongues, and were ready for Jesus to return. In many ways, the “Jesus People” had the same basic beliefs as other evangelicals, but with an added fervency, literalism, and—in many cases—sweetness…”

The Jesus People Revolution: the 60s hippies who changed the world premierchristianity.com
“..It was 1967, the year of the Summer of Love and the hippy movement was in full swing. Four years earlier, JFK had been assassinated. Protests were raging against the Vietnam War. The Beatles had just released Sgt. Pepper’s Lonely Hearts Club Band – the garish myriad of personalities of the album artwork a snapshot of the social upheaval of the era…

Fifty years on seems a good time to reflect on a movement which leading scholar Larry Eskridge estimates saw at least 250,000 people become Christians. The Jesus People Movement has been dubbed the last great American revival, yet the UK also felt its impact in a variety of ways…”

An Oral History of Jesus Movement

“The Jesus Movement”
How Jesus’ followers responded in the traumatic days following his death. pbs.org
“..I don’t think that [in the period following Jesus’ death] the disciples now were trying to look for the right stories in the Hebrew Scriptures [to explain his suffering and death.] But rather that these texts from the Hebrew Bible were already a part of their regular reading of texts, were already a part of their worship service. We know that in the Jewish synagogue scriptural text would be read and would be interpreted. So the disciples of Jesus must have lived in those texts and must have brought an understanding of the explanation of suffering on earth with them that was already part of their worship life, of their discussions of their meditations at the time. So it’s not like someone who tries to go back now and says, “let’s find the right text or scripture that would fit.” But it’s rather that out of the deep involvement in a religious tradition that was anchored in the worship life of Jewish communities, these stories about Jesus arise that now use the same words, the same language, the same images, in order to describe Jesus’ suffering…”