Neutral Perspective: Our Judicial System is fair and unfair? 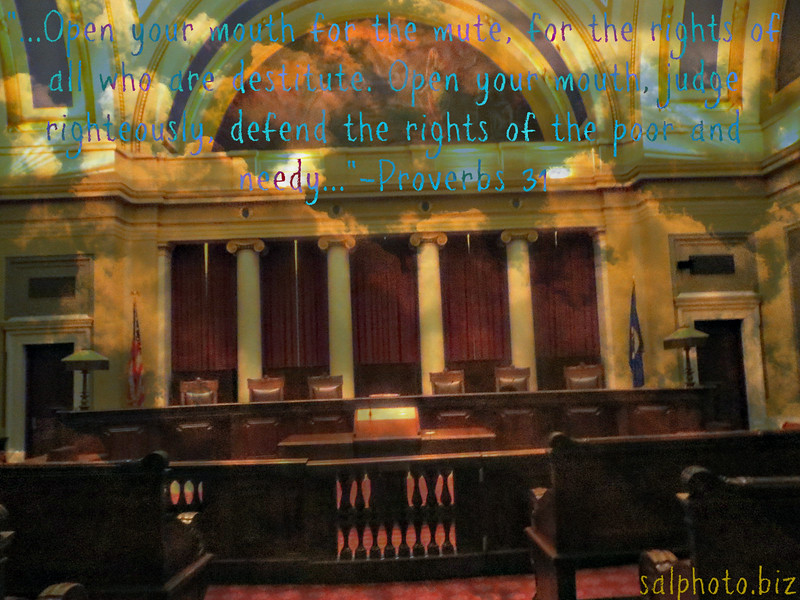 Detroit Man Wrongly Convicted of Murders When He Was 15 Freed After Serving 9 Years
CATHERINE THORBECKE,ABC News 1 hour 49 minutes ago (Wednesday, June 8th 2016) yahoo.com
” The murder convictions for Davontae Sanford, now 23, have been vacated by Judge Brian Sullivan, and all charges dropped against him, Maria Miller, an assistant prosecuting attorney at the Wayne County Prosecutor’s Office, told ABC News today.

Sanford was serving a 37-to-90-year sentence for a quadruple homicide he was convicted of in 2008, his attorneys said. Sanford was 14 years old when he pleaded guilty to four counts of second-degree homicide at the advice of a now-suspended attorney.

Heidi A. Naasko, a pro bono attorney for Sanford, told ABC News today that a hit man, Vincent Smothers, confessed to 12 murders two weeks after Sanford was sentenced in 2008. ..

The painful lessons of the Central Park Five and the jogger rape case
Jill Filipovic Fri 5 Oct 2012 17.32 EDT theguardian.com
The unfinished saga of the Central Park rape case shows that if police coerce suspects, the victims of a horrible crime multiply
“..”Police officers want to get the bad guy, but too often they pick what they believe to be the most plausible story and ratchet the facts into it. By the time the police are interrogating a subject, they’ve determined that the person is probably guilty of the crime. The goal of the interrogation isn’t to learn the truth: it’s to solidify guilt. “..

Sleep deprivation may sound relatively benign, but it’s been widely used as a powerful instrument of torture. Depriving a person of sleep removes their ability to think and act coherently. They have delusions and hallucinations, and the desire for sleep becomes so desperate that a person deprived of it will often do almost anything for reprieve – including, as happened in the Central Park case, admitting to murder. ..

The Central Park Five all took back their confessions upon being formally arrested. They were kids who had been kept awake for nearly two days and interrogated without attorneys present; they were told if they confessed, they could go home. The stories they told in their confessions were inconsistent with each other and with the physical evidence. Several of the boys said they stabbed the victim, but there were no knife wounds. Their stories varied on the location of the crime, the description of the victim and the timeline of the crime itself. There was little physical evidence tying them to the rape and beating. They were prosecuted and convicted anyway. ..

In the meantime, Matias Reyes, the man who actually raped and nearly killed the Central Park jogger, continued on his spree of serial rapes throughout New York City. Reyes had violently assaulted several women before the Central Park rape, including his own mother; the same year he committed the Central Park assault, he was also actively breaking into women’s apartments and stabbing out the eyes of his victims so that they couldn’t identify him after he raped them. He killed at least one of them…..

In 2002, while in jail for rape and murder, Reyes admitted to the Central Park rape. DNA evidence tied him to the crime. Tellingly, even after a judge vacated the convictions of the Central Park Five, police commissioner Ray Kelly stood behind the police work that put five innocent young men in jail:

“The judge’s ruling has neither exonerated the defendants nor found any collusion or coercion on the part of the police.”

Police officers are human and mistakes happen; that’s forgivable. Refusing to alter bad practices and placing your own interest in convicting someone ahead of truth and justice? That’s not…”

Updated 10:59 PM ET, Fri June 27, 2014 cnn.com
“..A dark chapter in recent New York City history stands to close with a proposal for the city to pay a $40 million civil rights settlement to five black and Hispanic men wrongfully convicted in the horrific beating and rape of a white female jogger in Central Park in 1989, a source with knowledge of the settlement told CNN on Friday…

The proposed agreement between the city law department and the five men — who served between seven and 13 years in prison — averages about $1 million per year of incarceration, according to the source…
One of the men, Kharey Wise, served 13 years in prison. Kevin Richardson, Antron McCray, Yusef Salaam and Raymond Santana Jr. each served about seven years…
In 2012, filmmaker Ken Burns, along with daughter Sarah Burns and her husband, David McMahon, produced an award-winning documentary about the infamous case. …

“It will finally give some closure and bring a measure of justice in this tragic case. The five men were just teenagers when they were wrongly convicted. … Their story has come to symbolize the immense challenges we continue to confront when it comes to race in this country, but it is also the story of five men maintaining their dignity in the face of injustice and now, of the collective power to acknowledge and correct our mistakes.”
Sarah Burns told CNN that it was time for the story of the Central Park Five “to be over.” ..

The victim, Trisha Meili, kept her identity hidden for 14 years until the publication of her book, “I Am the Central Park Jogger.”
“I guess there are lots of theories out there but I just don’t know and it’s almost too confusing for me to understand,” she told CNN in 2003, referring to the false confessions given by the five men. “I’ve had to come to peace with it by saying: ‘You know what? I’m just not going to know.'” “

Central Park 5 case concerns 5 youths that were running wild around central park assaulting persons.They were arrested and soon after a woman Trisha Miley was found raped and badly beaten and unconcious. They were interrogated and 4 out of 5 of them confessed to raping the woman. Subsequently a serial rapist and murderer Matiais Reyes operating in that area was caught and he admitted to raping that woman. It appeared the teenagers were innnocent. Post DNA…Why did they confess to a crime they didn’t commit. Disturbing and uncannily accurate confessions; and who is to blame? Did the police hold and interrogate them long enough to deceive and trick them into confessing. Were they merely parrots to police interrogators? ..

The Central Park 5 talk about their struggle for redemption!

Sunday 5 June 2016 23.19 EDT theguardian.com
“…The father of a former Stanford University athlete convicted on multiple charges of sexual assault has said his son should not have to go to prison for “20 minutes of action”.

Brock Turner, a former swimmer at Stanford University, was on Thursday sentenced to six months’ imprisonment and probation for sexually assaulting an unconscious woman.

The 20-year-old from Dayton, Ohio – who was convicted of three felonies, including assault with intent to rape – faced a maximum of 14 years in prison.

But Turner was expected to spend only three months of a six-month sentence in county jail after the judge, Aaron Persky, said positive character references and lack of a criminal record had persuaded him to be more lenient. Prison would have a “severe impact on him”, the judge said…”


“Short clip from the Gospel of John.”


Jesus’ trial had nothing to do with justice. The only witnesses were his enemies who wanted him killed. The judge was only interested in avoiding problems with the local leaders and even he was uncomfortable with killing this man.

Jesus did not die for anything he had done wrong. It was our guilt and shame he was carrying.

On the Trial of Jesus, tektonics.org
“..a) Jesus Himself filled the disciples in after the Resurrection.

We consider this to be the most likely answer. Jesus was with the disciples for 40 days after the Resurrection – plenty of time to relate the sundry details of what happened once the more theological stuff was out of the way. And certainly, Peter would want to know what his Lord had been put through as he was waiting anxiously in the courtyard…”
12 Reasons Jesus’ Trial Was Illegal Part 1 rcg.org
Jesus Before Pilate – A Fabricated Trial? , from youtube.com
Scholar Sees 4 Views of Jesus in Accounts of Death
By PETER STEINFELS
Published: March 27, 1994 nytimes.com
“..He goes on to discuss how the Gospels’ portrayals of the role of Jewish authorities in Jesus’ trials were colored by later conflicts between Christians and Jews, with lethal consequences for the Jews. Similar Look at Nativity..”
Experts’ Evidence for Jesus’ Trial, from youtube.com
“Uploaded on Mar 31, 2011

Dr Dirk Jongkind, a Research Fellow at Tyndale House, pieces together the earliest manuscript evidence for the New Testament and shows how it tells the story of Jesus’ trial before Pilate. Find out more at our website: http://tyndalehouse.com&#8221;
Site of Jesus’ Trial FOUND! from youtube.com
“Published on Jan 5, 2015

Archaeologists in Jerusalem say they may have uncovered the remains of Herod the Great’s palace, the site where the trial of Jesus Christ may have taken place prior to his crucifixion. “

Texas Judge resigns after being caught texting instructions to prosecutors to help win convictions In Crime by Poor Richard/October 25, 2013/54 Comments/ poorrichardsnews.com
“Texas district Judge Elizabeth E. Coker is stepping down from the bench after being caught engaging in a massive perversion of justice. A whistleblower revealed that Corker was sending text messages to prosecutors with suggestions on questions to ask in court in order to secure a conviction.

Her resignation also opens the door for a flurry of re-trials for anybody convicted in her court sessions. By trying to illegally secure convictions, Coker opened Pandora’s box, and now the state of Texas will have some massive legal knots to untangle…”

“On The 700 Club Wednesday, Feb 17.: An estimated 20-thousand innocent people sit in American prisons because of wrongful convictions. Marvin Anderson was one of those people. He was sentenced to 210 years for a rape that he didn’t commit. Find out how he was finally set free….” http://go.cbn.com/6591

Any other samples of legal cases out there that was “fair”, “unfair”, or “both”? Thoughts, comments, stories, feedback, etc.. on any of the content mentioned or not mentioned above?…