There Are No Atheists in Foxholes – Origin liquisearch.com
“The precise origin of the phrase is uncertain. Various sources credit Lieutenant Colonel William J. Clear, or Lieutenant Colonel William Casey, but the phrase is most often attributed to journalist Ernie Pyle. It has also been attributed to U.S. Military Chaplain William T. Cummings in a field sermon during the Battle of Bataan in 1942…”

Reverend William T. Cummings, who served at Bataan, is famous for declaring “There are no atheists in foxholes.”[1] In addition, Lieutenant Colonel Warren J. Clear, who also served at Bataan, used the expression in an interview printed in U.S. newspapers in the middle of April.[1]

Chaplain F.W. Lawson of the 302d Machine Gun Battalion, who was wounded twice in wartime, declared “I doubt if there is such a thing as an atheist. At least there isn’t in a front line trench.”[1] Hannah More wrote: “In agony or danger, no nature is atheist. The mind that knows not what to fly to, flies to God.”[2]

In recent years the organization Military Association of Atheists and Freethinkers has taken up use of the slogan “Atheists in Foxholes” as a list of those men and women who serve the country while lacking a belief in a god.[3]

President Dwight D. Eisenhower declared in remarks broadcast from the White House as part of a February 7, 1954 American Legion Program:
“ As a former soldier, I am delighted that our veterans are sponsoring a movement to increase our awareness of God in our daily lives. In battle, they learned a great truth-that there are no atheists in the foxholes. They know that in time of test and trial, we instinctively turn to God for new courage…Whatever our individual church, whatever our personal creed, our common faith in God is a common bond among us.[4]..

Speak Up!—The Deaf-Bed Atheist
Posted on March 17, 2014 harpandclay.wordpress.com
“Sources are uncertain as to the origin of the famous saying though most pin it to the WWII Battle of Bataan in 1942. Although the adage occasionally means that all soldiers in combat are “converted” under fire, it is most often used to express the belief of the speaker that all people seek a divine power when they are facing an extreme threat. The quote is also referenced when discussing the opposite effect — that warfare causes some soldiers to question their existing belief in God due to the death and violence around them.

Although not everyone goes to war and not all reach the same conclusion or faith in God, you can just about guarantee that all soldiers have thought about it at one time or another…”

There are No Atheists in Foxholes christianfighterpilot.com
12 February 2010
“The phrase “there are no atheists in foxholes” is not without controversy. (In fact, one Soldier even went so far as to file an official complaint because an officer used the “discriminatory” phrase.) The old saying, whose origin is unknown, isn’t meant as a moral conclusion or a statement of fitness. It simply characterizes the belief that in extreme situations and faced with mortal danger, many people are open to the concept of some form of higher power.

There are certainly examples of the opposite truth. A New Hampshire publication recounts the recent award of a medal to a World War II veteran. Milton “Chris” Christian, an 84-year old vet, was presented with a Bronze Star for his service 60 years ago. In the article, he says..”

The problem with the phrase “There are no atheists in foxholes”

*Note: Even though Ted might be considered “atheist”, he did call upon “God” during a “foxhole” event while he was a pilot in one of the missions he flew during the Korean War..

Remembering Ted Williams: A Marine Fighter Pilot mca-marines.org
“…The midnight-blue F9F “Panther” jet was coming in “heavy” and very fast. Its sluggish movements, trailing smoke and streaming 30-foot ribbon of fire all indicated serious danger. The pilot obviously was having difficulty controlling his aircraft, but he was too low to eject. His only course, therefore, was to try to bring his crippled aircraft in.

An already tense situation became worse when an explosion rocked the undercarriage as the plane approached the airstrip. The stubby fighter plane made a wheels-up “belly” landing, skidding along the tarmac with sparks flying for almost a mile before coming to a stop. The nose promptly burst into flames that threatened the cockpit. The trapped aviator blew off the canopy, struggled out of the plane and limped away, hitting the ground in a less-than-perfect baseball slide…”

How I Became A Christian

Cold-Case Christianity with J. Warner Wallace
Published on May 9, 2016
J. Warner Wallace is interviewed by Pastor David Fleming of Champion Forest Baptist Church and describes how he became a Christian

Cold-Case Christianity: A Homicide Detective Investigates the Claims of the Gospels

Is There Any Evidence for Jesus Outside the Bible? 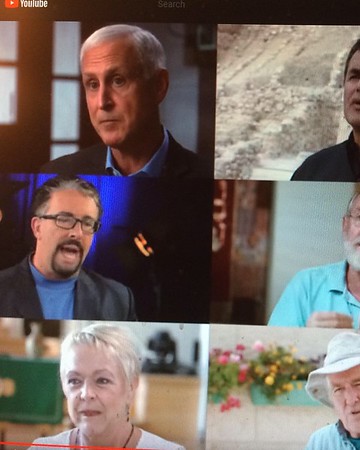 From Atheist to Christian at Yale – Dr. Paul Lim – YouTube

why-people-believe-god-atheists from yahoo.com
“..Being raised as a Christian, I personally dedicated my life to serve God at age 20, and was baptized to symbolize that decision.

At age 35, something triggered me to actually critically review the reasons I had for my specific set of beliefs.

What reasons do I have to believe any god exists at all?
What reasons do I have to believe the Biblical god Yahweh exists?
Could the same reasons be applied to support the existence of any other entity (e.g. aliens from a distant galaxy)?
What reasons do I have to believe the Bible has a divine source?
Could similar reasons be applied to other so called Holy Books that I do not accept as divine (e.g. Quran, Book of Mormon, etc.)?
What scientific evidence exists to support my beliefs (e.g. Adam and Eve created literally 6000 years ago, evolution does not happen, a global flood destroyed everything except whomever was in Noah’s ark)?
Do I have any personal experience that shows beyond doubt that God is my friend, that He answers my prayers one way or another?
After researching all those questions in-depth, I realized I have zero reasons to believe the god I worshiped really exists.
Quite the opposite, all evidence seems to indicate that the Biblical God does not exist.

I also researched very much in-depth the history, scandals, teachings and practices of my brand of Christianity to see if my religion could really be divinely appointed as the one true religion. Guess what, they’re not…”

The Man Who Met The Devil – True Story , from youtube.com with Peter Hockley