I was bullied for various reasons growing-up while attending Battle Creek Middle School from 6th to 8th grade.
It wasn’t such a big topic in the media back then, so I never thought of it much. I thought it was just part of life and didn’t see it as a social epidemic as it is covered in the media now. As I hear stories of bullying, I feel like what I went through was really nothing compared to the serious violence and abuse (both mental and physical) victims goes through nowadays.

Here are some “lite” stories of bullying I went through:

When I used to deliver newspapers for the local paper in St. Paul (Pioneer Press Dispatch), I hated going through certain parts of my neighborhood after school. Living by the middle school, kids would be coming out of school in groups and would walk by my route. I would find a particular “safer” route as I did it more, but when I first started, I ran into some really obnoxious peers at the time. For example, one time when I was delivering newspapers (PM edition), some group of kids started yelling “gook” or “chink” at me. They then would do the infamous popular “kung-fu”/”karate” moves at me. Being a “smaller” boy at the time and being one individual, I didn’t have a chance to fight them back. At the time, I reflected on some friends/neighbors (Vietnamese-Another neighbor and I loved watching Bruce Lee movies growing-up!) that offered my dad to have my siblings and I to learn Karate from them. During this and other times of being bullied, I wished my dad took the offer as I would’ve used karate on them! I just continued walking away and ignored them. I look back and wondered if I did know karate, what would’ve I’ve done. I had a lot of anger issues (due to family up-bringing and all the social pressures during that stage of my life) and probably would’ve got myself more in trouble!

However, I can’t imagine if I was the opposite-taller and built. They probably would’ve not even said anything like this and would be intimidated or just ignored me. What causes a group of people to team against or oppress an individual the deemed as “weaker” or “lesser”? Doesn’t this occur even amongst adults? (e.g. politically, religiously, economically, racially/ethnically, etc…) Sorry, getting too deep here, but what motivates one(s) want to “pick-on” another/other individual(s)? You hear it’s because a “bully” got “abused” (physically/mentally) by someone older (e.g. parent). Does this give them the reason to do this?

Is this the reason why movie goers are very fascinated with movie characters (e.g. Harry Potter, Marvel Comic Heroes, etc..) with special “powers”. I’ve heard from younger folks that they wished they had “special” powers and they would’ve used it on their “bullies”.

Another story was in the classroom at the school. I remember it vividly as it’s been a scar or was a traumatic experience at the time. I was sitting in a science class (Physics) and the teacher was gone. Several known “bullies” of mine started “gleaking” (lightly spitting) at me. Being a “passive-shy-weakling” at the time, I pretended to ignore them and just took it. What could’ve I done, stand-up and fight the taller-bigger guys than me? I was outnumbered!

Being “Asian”, I was stereotyped as a “bookworm” and I was a studious guy (ey, I got to college on a full-ride scholarship, so it paid off ;)) A friend (taller than me) and I were heading out after school ended. While I was heading to my locker, this “bigger-taller” boy closed my locker and told me to do his homework. I had some “boldness” (learned from watching t.v., like “Saved by the Bell“-I didn’t want to be like Screech-lol!) in me, so I told this guy “no”. He probably wasn’t expecting this, so he actually pushed me against the lockers and demanded that I do this. Fortunately, my “taller” friend stood-up for me and told this “bully” to leave me alone. Unfortunately, this “bully” was bigger than my friend, so this “bully” pushed him too against the lockers. I was very thankful for my friend and was more focused with gratefulness of my friend doing this for me than the “terror” of this bully. We were both shoved to the lockers so loudly that one of my teachers came out of his classroom wondering what all this noise was about. Fortunately, we were both “saved” by this “bully’s” rapture as we both walked out of school “safely” that day.

Due to my “multicultural” looks, I would be teased with various racist remarks. During the Persian Gulf War, a “friend” would tease me that I “looked like the enemy” (Arabic). This would go on even through college and beyond, which I grew to have a very lose self-esteem and was self-conscious about my “physical features” in various places. Due to this remark “way back then”, it effected me when 9-11 happened after my college years. I haven’t shared this with many people, but when 9-11 happened and watching on the news of “Arabs” or “Muslims” that “look-like” the enemy were targeted in America. I got scared and hid for a season. I was afraid to go out of my house during these tense times as I was afraid of getting “attacked” in retaliation of 9-11 (would find out later about the “truth” behind the attacks, which can be another story ;)).

A “Bully” Myself Once

I have to be fair and honest too in this blog post that I wasn’t always “bullied”, but I was also in the “dark” side too-“bully” himself! 😦 I’m not proud of this either, but I look back and probably was a “bully” in some instances because I was “bullied” myself. I felt like I had a position of power in some scenarios and abused them. For instance, I remember fighting this younger-smaller guy in elementary school. I still can’t remember why I did this. I pushed him around and nothing too violent, so I wasn’t too rough on him. 😉 Another instance, this individual in high school was so annoying and I had to “act” tough. I told him that we should fight after school, which he accepted. During class, I then began thinking that this individual will probably bring his “hommies” or “gang” friends and “jump” on me. I then told him “cowardly-humbly” that I decided I don’t want to fight, which he agreed..lol! I also had some instances where I teased people because they “look” poor or whatever, but I regret this because I too was in their shoes and don’t understand why I did this.

My parents immigrated here (St. Paul) from the Philippines in the early 70’s and we didn’t have much like many other immigrants residing in a “new” land. I remember one Christmas, we couldn’t afford a Christmas tree like many other “Americans”. We found a tree branch in our neighborhood while walking in one cold winter day, so we decided to take this tree branch inside and make it our “1st” family Christmas tree. We even decorated it and put ornaments that we just creatively made. My parents couldn’t afford the current trending shoes (e.g. Nike) those days, so I wore “Pro-Wings” from Payless Shoes Store (I’ve bought shoes still from this place as they have some good deals, but honestly-not very quality). Growing-up at that time (still I heard), students in school would just ridicule you with the brand or type of clothing-shoes you wore. I just got teased “left and right” back in elementary school for wearing these “cheap” shoes. Another similar instance was when I was wearing some “old-school” pj’s underneath my jeans with a hole. It was winter time and these “pj’s” were like my thermal underwear to keep me “extra” warm. I guess I would tease someone with this type of dress code. I felt like I was “worthless” at the time and it got worse growing-up through high school.

I actually feared going to high school after watching t.v. shows or movies on how “nerds” or “losers” (like me) were treated. Fortunately, folks in high school were a little more mature and it wasn’t as bad as I expected. I got teased a little (e.g. looks-physical characteristics) once in awhile, but I just had a very low self-esteem (due to factors in and out of school). I had some “suicidal tendencies” due to depression caused by many factors that I can share for another blog, but this is one of the effects people still face due to bullying.

I finally started going up-hill during my college years, which here is my story. 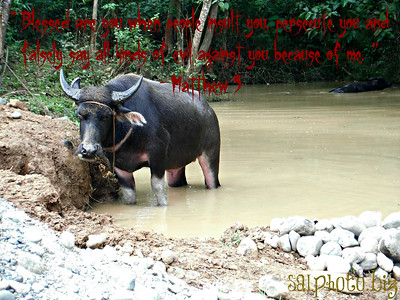 11 “Blessed are you when people insult you, persecute you and falsely say all kinds of evil against you because of me. 12 Rejoice and be glad, because great is your reward in heaven, for in the same way they persecuted the prophets who were before you…”

In conclusion, I believe social support and communication or dialogue is very important to stop bullying! I really didn’t get this growing-up. I grew up in a very quiet-passive (Asian culture) family, which I never shared this with my dad, mom, and even my siblings (I shared one of my stories with one of my siblings the past year or two and they replied-“How come you never told us?”) . I just kept it inside of me like a volcano that was waiting to interrupt. My personal tip now is parents need to have an honest one to one dialogue with their child/children. This can happen over a meal time at the dinner table (get your kids to put their smart phones away, shut the television, etc..). If you read my story above, building self-esteem is very important to help “victims” of bullying overcome this stage or season in their life. As a former “victim of bullying” and “a bully” too, I want to help those in this category through social networking (e.g. Good News Sociology, Youth, etc…). How can we “work-together” in helping those out there?

Would love any feedback (e.g. personal stories, advice to help others, other resources, etc..) more….. http://issues.goodnewseverybody.com/bullying.html